Although Indian art traditionally features figurative portrayals of deities and represents the Divine in many wonderful forms (as can be appreciated in “Divine Portraiture,” another MOSA exhibition), Jayant Silva expresses himself through calligraphy, a more rare art form within Vaishnavism. He has made it his mission to use a rare Sanskrit script called Siddham and use calligraphy as a means to express devotion to the Lord in amazing ways. Vaishnava tradition has many wonderful scriptures and writings by different acharyas, or spiritual teachers, and to bring them to life with sacred calligraphy, a classical art form, and in various creative ways, is a new contribution to the expression of bhakti.

While Islam has a well-established, well-developed calligraphic tradition not least because of the prohibition against representing images of the Divine or indeed any living being, whereas the Vedic tradition has no difficulty in representing the many forms of God and different devas in a multitude of styles, traditions, and media. Calligraphy, however, has not been used very much in Hindu art. Yet the richness of the scripts used to write in Sanskrit and other Indian languages as well as the variety and depth of Vedic and Vaishnava scriptures are a perfect source of inspiration for calligraphy. In other words, the diversity and depth of India’s sacred traditions allows for diversified artistic expression: traditional art forms, contemporary art, figurative, abstract, and even calligraphy.

In calligraphy, the meaning of the texts, verses, and syllables becomes as important as the beauty of their artistic manifestation. To understand them and ponder and meditate on their meanings will surely enlighten us and inspire us in our spiritual practices and devotion to the Divine. 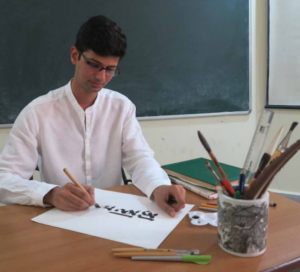 Jayant is an artist and a computer scientist. He explores contemporary and traditional themes in Indian calligraphy. He primarily works with ink, watercolour and gouache on paper in a number of languages such as Sanskrit, Bengali, Tamil and Marathi. Besides these traditional media, he also explores the making of letterforms using embroidery, engraving, embossing, cutting and folding on a number of surfaces such as wood, metal, cloth, leaves, paper mache etc. In these works the emphasis is on the letterforms which are developed with sensitivity to the medium in which he is working. To achieve this he uses a number of scripts such as Siddham, Modi, Bengali, Ranjana, Devanagari and Tamil. Another unique aspect of his work is the use of artificial intelligence to explore new forms in Indian scripts.

He actively teaches calligraphy in Indian scripts such as Siddham, Modi and Devanagari. His work is part of the permanent collection of the Museum of Sacred Art, Belgium, the Klingspor Museum as well as several private collections. His work has been featured in music albums, newspapers, magazines and books.