Divine Portraiture is a collection of iconography that engages four artists — each in his own distinct way — can be traced back to specific idols that adorn renowned temples and the artist’s faith and philosophies. The figurations of various gods within the pantheon are based on narratives and linked to pilgrim sites and appear with their attributes as specified in epics and scriptures. For all four artists painting icons is not a chore but the result of an innate urge and of efforts driven by faith and conviction as well as research and study. While Manivelu and Drdha paint and draw icons inspired by their religious leanings and strictly in accordance with theological doctrines, Srinivasa and Manish re-create deities on canvas or paper according to their own mind frames. The aesthetics and colourful artistry is reflected in well-proportioned portraitures that sometimes strictly adhere to and sometimes simply draw on the shilpashastras (scriptures that prescribe rules for artisans).

In their works, all four artists attempt to humanize and democratize the form and spirit of the divine to make it accessible for a wider public. With tranquility as a recurring undercurrent, their sublime imagery captures the viewer’s attention. Inundated with venerated pantheons, their repertoires encompass various deities worshiped across India. And their impeccable brushes, steeped in in-depth research and dipped in soulful feelings, bring to life these divine portraits. 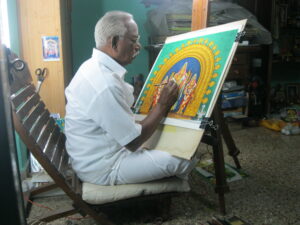 Manivelu is known for his fine and detailed paintings of gods, goddesses and various deities. Working on handmade paper stuck onto cardboard, he sits and meditates before the idols in temples before he begins with the drawing. Initial drawings and sketches are then developed into paintings. The icons and narratives are depicted exactly as in the originals, complete with all their features, ornamentations and attributes.

Drdha Vrata’s intricate drawings of the portraits in his repertoire feature different Hindu divinities widely worshipped across the India and beyond. The meticulously designed lines and markings that encase different godly portraits evoke a devotional fervour. There are also painted iconic images. The navagraha (nine planets) portraits make an engaging ensemble of divinities composed with all their symbols and trappings. Other portraits in the iconography include Vishnu, Garuda Vahana, Hanuman, Sri Sudarshana, and Devi. There are black and white pencil drawings and watercolour paintings on paper. Most creations are small to medium size, but the navagraha, which appear in minuscule form, exemplify his expertise in handling form and colour. There is a certain sculptural feel in his two dimensional works, which seems to come from his apprenticeship with artisans in South India. His divine imagery significantly contributes to the current collection. 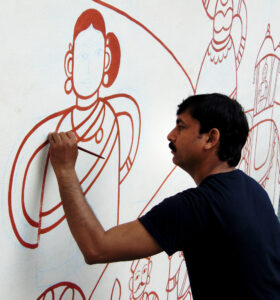 Manish Verma’s divine portraits here reflect Buddha’s worldwide appeal and his preaching about the cycle of life and final liberation. There are telltale motifs that link the imagery associated with the divine form to the Bodhi tree and the Mahabodhi in Gaya and other monasteries. Rooted in symbolism and history and described as ‘visual poetry,’ Manish’s portrait paintings feature the leaf, flower, skyline, and other natural elements. They not only add to the appeal of the compositions but also reflect the artist’s concern for the nature. In this collection, Indian spirituality and Bodh Gaya remain consistent undercurrents in all of the artist’s portraits and some include references to Jataka tales (tales concerning the previous births of Gautama Buddha). “Spirituality or religion has always motivated me in my creations,” says Manish. But the artist does not blindly follow the religious route, since he prefers to “take some part of it and blend it in my work in my own way.”

Srinivasa Reddy’s art mirrors his early experiences and learnings at an ashram, a traditional spiritual hermitage where young people live and study under the patronage of a caring guru. These experiences, Srinivasa says, “tickled my creative senses.” His paintings featured in this collection are not simply beautiful images; they are reflective of his mind frame and leanings. “I am inspired by our tradition and culture, and I believe in humanity.” Mirroring these thoughts and what he describes as the prevailing ‘socio-political scenario,’ his work appears in a variety of media. He often creates portraits of different gods and goddesses in grey tones as well as black and white. The icons appear with their familiar attributes in muted colours and various postures and look like the stone sculptures that adorn India’s ancient temples and historic sites.