Tryna Lyons is a Seattle-based art historian with degrees from the University of California in Berkeley, and the American University of Paris. She has held research grants from the Fulbright Foundation and Guggenheim Foundation, and has taught at universities in the US and the Middle East. Her book on the Nathadwara painters of Rajasthan, The Artists of Nathadwara, was published in 2004 by Indiana University Press in association with Mapin Publishing.

India is a vast country: a subcontinent. India is also one of the ancient civilizations of the world. The antiquity of its civilization is matched by the vastness of its geographical extent. Both of these have contributed to the rich and multiple art forms of India.

This diversity is aptly illustrated by the artworks chosen for display in the collection of the Museum of Sacred Art. We know that stories associated with Shri Krishna arise, among other sources, from the Mahabharata, the Harivamsa, the Bhagavata Purana, and the Vishnu Purana. The narratives in each of these, place Lord Krishna in various perspectives: a God-child, a prankster, a model lover, a divine hero, and the Supreme Being. The Museum exhibits works of art with these themes, from Orissa, Tamil Nadu, Karnataka, Kerala, and Rajasthan as well as from Indonesia, Nepal, Tibet, and Thailand. Though these pieces are drawn nom different regions, and indeed from different countries, they have a strong commonality threading through their diversity The Mithila paintings from east India, the Tanjore paintings from the town of Thanjavur in Tamil Nadu, the pichhavais nom Rajasthan, the rod puppets from Indonesia, and the many other works in the museum capture the beauty and the philosophy of Shri Krishna’s timeless message of love and karma (duty) as embodied in the Bhagavad-Gita (“The Song Celestial”).

I am very happy to see that Radhadesh has established a collection at the Museum of Sacred Art to facilitate a glimpse into this sacred art influenced by Hinduism. It is hoped that visitors will come to the museum nom all over Europe and from various walks of life, and see the beautiful works on display here. This will give them an opportunity to appreciate these works of religious and sacred art, and to understand the plurality and diversity which have contributed to their beauty. 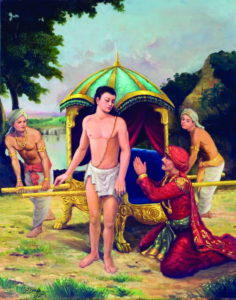 Acarya Prema was born on 26 February 1956 in Sant’ Antimo, Naples, Italy. He studied Architecture at the University in Naples. From 1981 to 1986 he was part of the International Art Academy in Villa Vrindavana, an ISKCON temple in northern Italy. He works as a professional artist, producing paintings, both originals and copies, on commission. One of his main sources of inspiration comes from the works of the school of Romanticism. 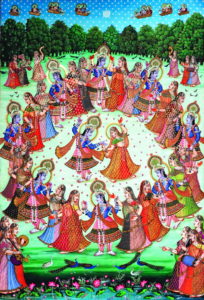 B.G. Sharma was born in Nathadwara, Rajasthan, on 10 August 1925. He was taught to paint by his father and grandfather, who were also well-known artists. B.G. Sharma attended the prestigious J.J. School of Art in Mumbai. He later developed his own distinctive style, renowned for its elegance of composition, delicacy of detail, gem-like colours, and light-suffused images. The hallmark of his work is its unmistakable aura of deep devotion. His style, based on the Nathadwara tradition, contributed significantly to the culture and popularity of both traditional and contemporary Indian art.

He retired from commercial painting in 1967 and settled in Udaipur. The Shri B.G. Sharma Art Gallery in Udaipur contains an extensive collection of his works. The late Indian Prime Minister Indira Gandhi, the British monarch Queen Elizabeth II, and the former Australian Prime Minister Malcolm Fraser had commissioned portraits by B.G. Sharma.

During his life, B.G. Sharma was recognized as the foremost painter of Indian miniatures and his work has been exhibited internationally in London, Germany, and the United States and has influenced and inspired many other artists. He was a winner of numerous awards, including the National Art Award for Master Craftsman given to him by the Government of India in 1983. He was a cousin of Indra Sharma, also exhibited in MOSA at Radhadesh. 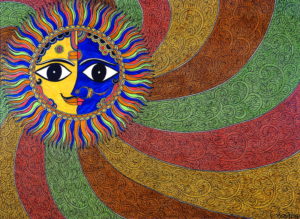 Bharti Dayal born in 1961 at Samastipur grew up in the Darbhanga district of Bihar, in Maithili region, known for the Madhubani style of folk painting. Though her formal education was in science and she holds a Master’s degree in the subject, she continued to learn painting from her mother and elders in the family, painting alpana on the floor and sketching epic scenes on the walls to celebrate auspicious occasions. Using natural vegetable dyes and crushed rice paste on handmade paper, cotton and silk fabric and canvases, she continued to practice in her spare time and refine her skills. Marked for its rich colours and dense form, in Madhubani style, her art has a refreshing feel, given its assimilation of newer imagery with folk imprints and philosophical underpinnings. The focal protagonists in her works are Radha-Krishna and other deities worshiped in the region. A vigorous proponent of Madhubani art, she also guides and supports struggling artists practicing the folk form. Showing professionally since 1991, her work has been exhibited in numerous shows across India and internationally. It can be seen at Bihar Pavilion, India International Trade Fair in New Delhi amongst others. French Television and Discovery Channel have made documentary films featuring her work. Winner of the National, State, AIFACS and Millennium Art awards, Bharti lives in Delhi and works from her studio at home. www.bhartidayal.com 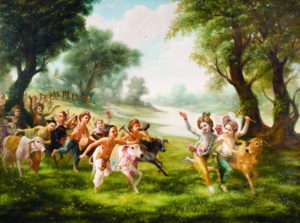 Dhriti Dasi, also known as Miriam Briks, was born in 1957 at Wroclaw, Poland and is an ISKON follower. She was introduced to art at the age of five and later studied

it formally at the Art Students League and the School of Art and Design, both in New York. After completing her graduation, she went to Los Angeles where she joined

the artists at the Bhaktivedanta Book Trust (BBT) art studio. She worked there on many projects, including a 24-volume series of the Chaitanya Charitamrita, a classic GaudiyaVaishnava text from India. Dhriti met her husband, Ramadasa Abhirama Dasa, at the BBT art studios, and painted many works together. In 1979 they went to Florence, Italy where Dhriti headed a BBT art department. Whilst in Italy, she studied at the Academia de Siena, and began exhibiting her work in Italy, France and England. She returned to the United States in 1986 and began following the impressionistic style of painting. Though trained primarily in classical art, her work includes more varied use of colour and strong gestural strokes, inspired by artists such as Sargent, Chase, Sorolla and Zorn as well as her studies of Indian epics. Her figuration is skilful and evocative. It brings alive the featured narratives. Dhriti’s works are held in many private collections throughout the United States and Europe, and she continues to work from her base in the USA. 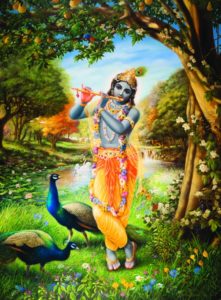 Dhruva Maharaja / Dennis Sirrine was born in Midland, Michigan, USA on 3 June 1947. He began drawing and painting as a child. In 1968 he graduated with honors in fine arts and illustration from Kendall School of Design, Grand Rapids, Michigan and earned a B.F.A. in painting at the Minneapolis College of Art and Design. He also spent three years abroad studying the old masters, painting in Italy and France, and touring throughout India. During the late 70s and early 80s he made several paintings for the BBT. Since then he has run his own graphic design studio in New York, all the while honing his skills as a painter. He is currently a painter living in southeastern Connecticut, USA. Sought and owned by private collectors and corporations, his work has been on exhibition in several galleries along the east coast of USA.

He has also won many awards for his work and belongs to several arts organizations, serving on the boards of the Salmagundi Club (New York) and the Lyme Art Association, Old Lyme (Connecticut).

Illuminations from the Bhagavad Gita

The Many Colors of Satsvarupa Dasa Goswami