The Museum of Sacred Art (MOSA) in Radhadesh, Belgium, is exhibiting the works of famous Indian mandala painter Om Prakash Sharma, whose meeting with Srila Prabhupada left an impact on him.

Now 85 years old, Om Prakash has had a long and productive career, including serving as Dean at the Delhi College of Art for over a decade.

He met Srila Prabhupada at Dr Mishra’s yoga studio in New York City on December 15th, 1965 – before ISKCON was incorporated. Om Prakash was in New York on a scholarship with Columbia University, while Prabhupada was experiencing his first winter in the Big Apple.

Srila Prabhupada was at Dr Mishra’s to speak, and when he found out that it was Om Prakash’s birthday, he gave an entire, very long lecture on the meaning of the artist’s name.

When they stepped outside after the talk, it was bitterly cold. Om Prakash, noticing that Srila Prabhupada was only wearing light Vaishnava robes, gave him the coat he had just bought at the Salvation Army. Prabhupada was very pleased, thanked him and blessed him – an encounter Om Prakash remembers to this day.

Over 100 people attended the opening of the artist’s exhibit at MOSA entitled “Recreating and Transforming Mandalas- A Spiritual Journey by Om Prakash” on June 10th. Guests included Hindus from Antwerp, Radhadesh residents and members, and people from the nearby town of Durbuy.

Also in attendance were Durby Mayor Philippe Bontemps and the CEO of the State Bank of India in Antwerp, which sponsored the show.

Om Prakash’s work focuses on the traditional Hindu symbol, the mandala, which is currently very much in fashion in the Western World – but recreated and transformed to add a new spin.

The abstract exhibit features 65 colourful, geometric paintings of the mandala, which is considered a meditative symbol. Some incorporate Lord Shiva, the sitar, the Indian flag, and the circle, which symbolize the bindu, creation, and yin-yang. Sizes range from small to giant two-meter-by-two-meter pieces.

While Om Prakash’s work may seem atypical for an ISKCON-run museum, MOSA director Mahaprabhu Das explains that the Museum has two exhibits a year – one during the Radhadesh Mellows kirtan festival in January that features devotee artists, and one in May/June featuring Indian artists to provide broader appeal for the 10,000 or so tourists who come to Radhadesh during the summer.

The art in these shows presents the broader Vaishnava and Hindu heritage. They also display MOSA’s mood of inclusivity and openness.

“For the past fifteen years we have been trying to counteract Belgian people’s view of ISKCON as extremely sectarian,” Mahaprabhu says. “So we try to be broad. As its name suggests, MOSA presents sacred art – not just from ISKCON, but also from other Vaishnava traditions, and other traditions in India.” MOSA is also open to showcasing art from other faiths in the future.

Guests learned about Om Prakash’s art by reading a specially-produced catalogue for the occasion, researched and written by well-known curators Chris DeLauwer of the MAS Museum of Antwerp and Jan van Alphen, former Chief Curator of the Rubin Museum of Art in New York.

The exhibit opening also included speeches by Om Prakash, the curators, and MOSA director Mahaprabhu Das. After these, prasadam snacks and drinks were served, followed by a concert with flautist Hariprasad Chaurasia and lunch at Govinda’s restaurant.

The exhibit of Om Prakash’s artwork will run until January 2018.

Looking to the future, MOSA has just received permission to build a brand new museum for temporary exhibits in Radhadesh, which will start construction soon and open in early 2019. 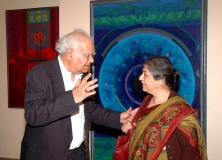 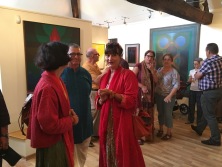 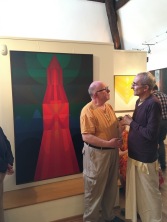 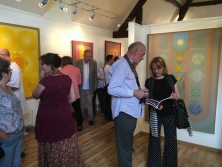 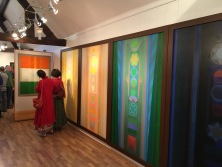 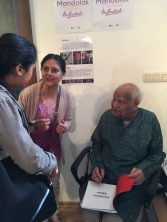 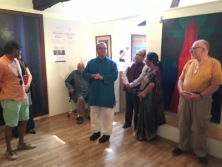 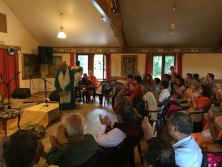